Now what with all the downloading of photo's I cant remember where i am, except it was Cornwall and a beautiful day!

Oh yes after Hayle I went down to Sennan Cove to find a Yellow legged Gull, which i did after a while of studying lots of lesser black backs, Herrings and the occasional Greater BB - they are enormous when you accidentally stand near one!
There was at least one Common Gull here but as it flew off the other one i saw might have been it back! Boy it would have been good to have been with another birder as you can lose which bird is which when there are so many!

Paul would have been in his element! So many gulls so little time. Anyway i left the Cove which was a bit too full of tourists and birders (another lot who were keeping themselves to themselves...so grockles to a boy!- Actually I might be doing them a disservice as they did appear to have coffee and teas! One deligent birder was scoping for his life....so I guessed the YLG was elesewhere and it was. It was in a field as I discovered a little later!(this was a refound or refind bird!)

Then it was on to discover a few self found birds - oh I also saw a Whinchat and a Raven which I didn't write down on my list!No Choughs though which was a shame.
The Self found birds that ought to be reported? (Which I have btw along with the Red Kite as Peregrines are not noted here...I think they get so many!)

Red-breasted Flycatcher at the lighthouse at Pendeen Point which i just had to go to look at in the sun!Never seen it out of rain and wind! I also tried to refind a Rosy starling but I failed but now i have seen a pic of the little thing I'm hardly surprised as it looks different to the other Rosy I have seen this year in Wales. Still awaiting a stonking adult male though. (got a lovely photo by Kit Day of one as an incentive which I won in a Bird guides competition a couple of years ago!)
Oh have I mentioned Buzzards? Probably not sawa really pale morph along the main road to Lands End/Sennen. I also saw a another couple of dark birds - one I did get a record shot of - nearly got a brilliant shot but as i opened my car and got scope out a young man asked me the way to a place that wasn't on my OS map - but trying to help him meant the bird flew off!

I digress- on to the Ortolan Bunting outside a tiny village M (something)Madron.
Its great on these back road you can stop when you like and the birds take no mnotice if you stay in the car.

Then it was on to Marizon Marshes where I saw some Dragonflies....beautiful!(id later as I still havent decided what they were! 4 seen ......
Here I watched some Meadow Pipits feeding and then realised after they had flown away and then come back that one was not a Meadow but something else and whilst I thought Richard's I had to look into the field guide again to check!
Then the little blighter's flew over a hedge and I couldn't find them again...well i found some other Mipits! Richard's Pipit very nice!

The best thing about these birds was that they were all year ticks and two were UK ticks and one the RBF was a lifer! So that was all jolly well brilliant!

I went off to find a loo (this being important for a woman birder) and was going to get an ice cream as it was so hot but the que was too long so I left to try to find
Stithians Reservoir .....however I was rudely interrupted by the pager bleeping - MEGA.... and there no not the Alder Flycatcher back or relocated but a Red eyed Vireo! Well there should be no doubt about that id I thought and i will know what it looks like without having to check the Sibley or NA Field guide (that is at home!)as I saw my first in Canada in 2004! So it was about turn double check the OS map as to where the bird was and where I had to go to park! and off I went - on a Twitch!

Well what a cracking little bird! If you havent already seen it on Surfbirds or Birdguides then look on Cornwall Birding

What a little cracker!

(the Alder Flycatcher is also pictured )

I meant to say there were lots of birders about near Sennen Cove - mainly in three's and four's must all have been looking for that RARE. 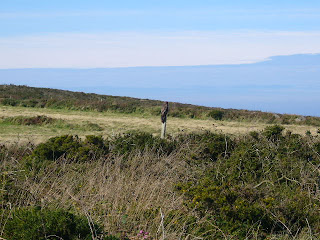 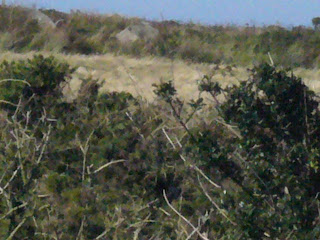 Something had been here...was it the Whinchat?

There was not really time to have a real search of all the gulls on the other part(also sailing people were a bit of a nuisance - in that they get in my way!
Nothing against sailors.

But not much on the other bit - I gather its the fault of the grey heron!

Looks an interesting place for a weekday! Now I have found it will visit next time I am in Cornwall.