Well today I finally managed to download all the photographers photos from our trip to Tanzania. I had to buy some dvd's to burn the photos on a I couldn't download from the external hard drive to my hard drive.

So I have all the photos - all the sunsets and there are lots as Pat spent each evening we were at Manta Resort taking pics!

What a day - Bolt not doing what we expected - seems like rather too many athletes being disqualified the starter doesn't appear to be that good as he holds them a lot and is a bit picky - I would have immediately asked for an appeal on Bolts part rather than the drama that ensured - just claimed all the cliclking of the cameras made me do it - cant see anyone not agreeing!

Well and then I had several houses to visit to feed cats and spend time with them- so I timed it to be when Five live did the commentary on ManUtd v Arse.
So I left Tillie happy with the begining and then Alf was happy after the usual moans and the cat that gained most was Poppy! As I was there for the second half.
But where was the home loving Rosie?

Looking forward to seeing the gamne on Sky tonight or going round to Pats and watching it on MUTV!

My lot have just been tempted by Duck breast- not that they got anything except the last bits !

So now I have to start the blog about Tanzania!

Before that though - the seawatching wasn't all that I had hoped but Dunge delivered a Balearic shearwater and a Whinchat ( yearticks) and a Kent Tick finally of Raven!

So Friday was the trip to attempt the Warblers- Bonnellis for the year and Greenish for a lifer! Greenish has been a blocker for some time - usually turning up- in England when I am on Shetland or abroad!

So it was emense relief when not only the Bomnnelli flicked and twitched and turn just enough to see it and the Greenish finally sang from the top of a tree in full sight!

I also added a Red-backed Shrike as a bonus!


Now my mate Bob was a tiny bit jealous and shot off there on Saturday - fortunately he too spotted the pair!

We had Monday down for a trip if anything turned up or what? Not sure anything new has (apart from Seaforth) but thats flown orsomerset for a crake- can I be arsed?

Posted by Eagleseagles at 7:14 PM No comments:

I must do some seawatching!

Well its time to think about some sea watching- I have to think where? when? and look at the weather!
Apparently there may be winds from the east this next week so migrants and other birds may arrive from the Continent
But I do need to spend some time staring at the sea!

East coast sounds good - I wonder if Reculver might be a good idea? or Shellness?

Where ever it will have to be later in the week as I have a couple of committments to fulfill.

I have also to make contact with Kempton Nature Reserve and organise a visit to Hounslow Heath in the company of Chris one of the rangers for a biodiversity visit.
Posted by Eagleseagles at 2:42 PM No comments:


What an interesting August! I return to see I have missed a couple of nice year ticks.

White-rumped Sandpiper at Snettisham and another white bird - a WWBT at Grafham Water and then a trip across Essex to see the Sub-alpine Warbler a pretty littlebird!

But finally a bird I have dipped more times than I care to recall - I even missed one in Canada in 2004 (I was looking in one direction on a pelagic and it flew in another and it wasn't called out - I found out much later!)a Sabine's Gull - great.

I cant link - the Christchurch Harbour Ornithologist Group has some superb images....

I shall post one here which shows the lovely gull in flight with thanks to Jimmy Main.I shall attempt to get permission as I find their photographs really show the details of this bird who appears to be aged as a 1st Winter - altho it was reported as an adult.
More importantly for me - this is my 400th UK species (BOU). 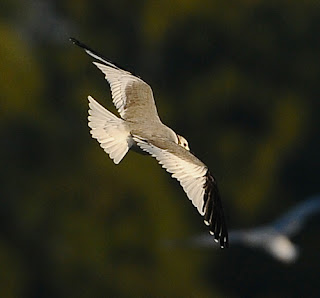 Giraffe and a Bird

These have come out in the wrong order - the long distant Martial Eagle is the one we watched catch a Helmeted Guineafowl and then walk along with it attached to one foot before taking off and landing in a nearby tree where somekind of change of talons occured.(30/7)
The close ups were of a bird in a tree towards the end of the day on the 1st of August. Both birds were in the Serengeti.
Martial Eagle is a magnificent bird! 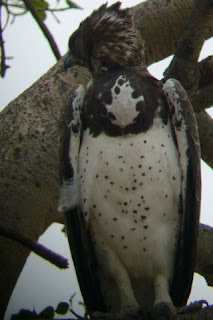 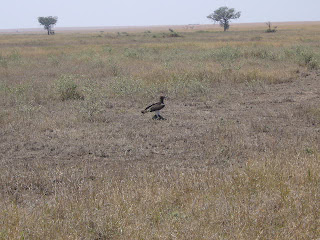 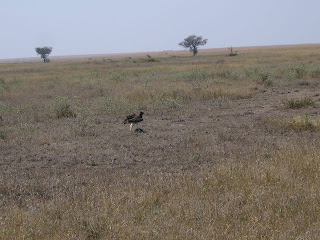 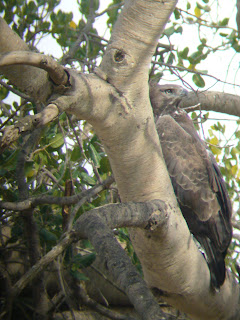 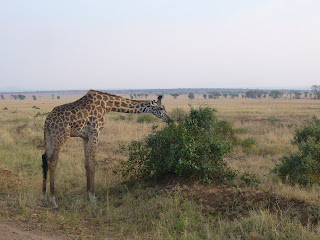 Posted by Eagleseagles at 4:27 PM No comments: 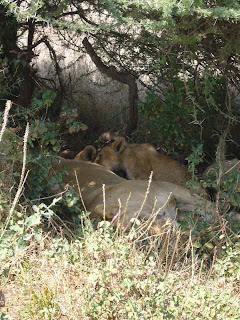 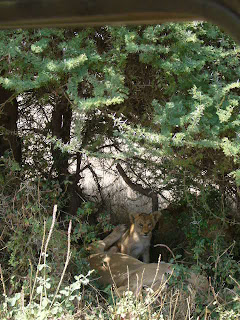 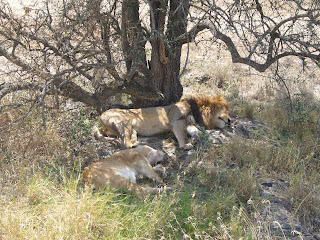 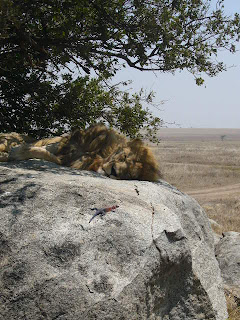 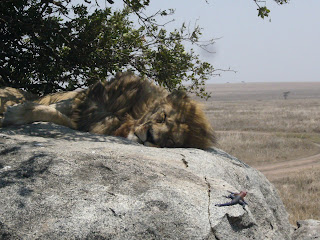 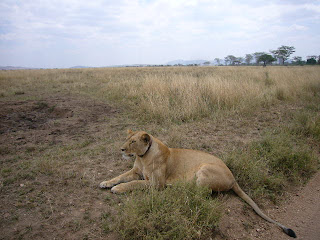 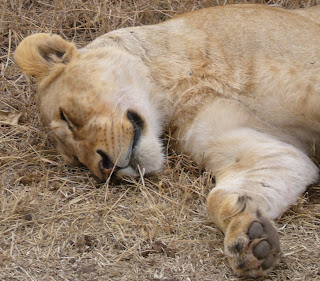 These are mainly from the Serengeti - one Lioness from the Ngorongoro Crater - she is the one with the big paw!

Posted by Eagleseagles at 4:20 PM No comments: 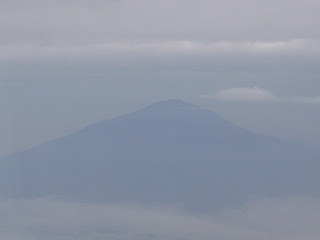 A view of Mount Mara the other high mountain nr Mt Kilimanjaro Airport - its the nearest mountain to Arusha and dominates the skyline. 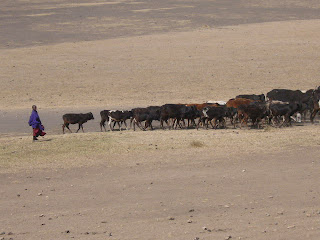 On the journey to Serengeti we saw Masai and their cattle in the Ngorongoro Conservation Area.

Posted by Eagleseagles at 3:54 PM No comments: 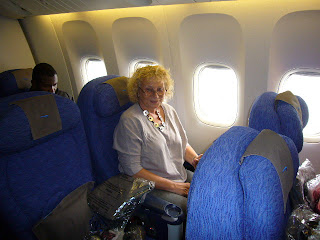 The holiday started with an upgrade(free) from World Travellers(economy) to World Travellers Plus - as you can see the ace photographer Pat looking pleased with herself!
Whether they were over booked (we couldn't get our boarding card online due to the tickets we had) or because Pat has an airmiles card for BA.
Very nice to travel so far in a bit of luxury!

Posted by Eagleseagles at 9:44 AM No comments:

Some mammals.
There is also a "Twitch" Serengeti style.
Black Rhino's are in Ngorongoro Crater
All other pics are from the Serengeti. 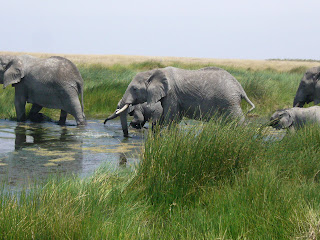 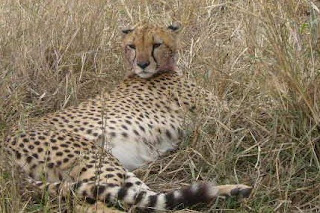 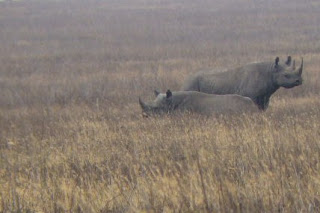 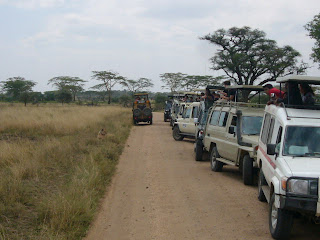 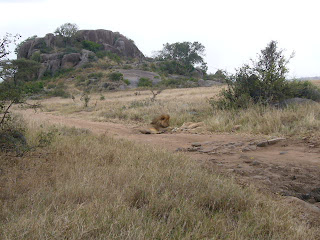 Posted by Eagleseagles at 5:51 PM No comments: 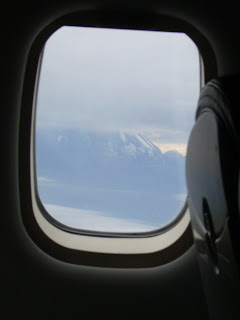 View from our plane of Mount Kilimanjaro!

What an amazing country, such lovely friendly and gentle people and a fantastic adventure. Thanks to Roy Safaris(especially Nancy) and our driver/guide Richard who was full of knowledge, helped me id many birds and got the Jeep into great positions for Pat's photographs. Richard has a lovely sense of humour and an understanding of irony!

Really difficult to know where to start so a few pics (mine)- you will have to wait for the decent photos to be on here- as Pat has to download rather a lot and sort them out - there are some brilliant photographs to be posted!

I took a limited number as my memory card was full very quickly- I discovered why on my return home when I downloaded the pics using windows and founs all the video clips still on the card! Cant be seen through the camera.
I didn't mind!

I will mention the dust and the long bumpy roads because its true there were a lot of both! 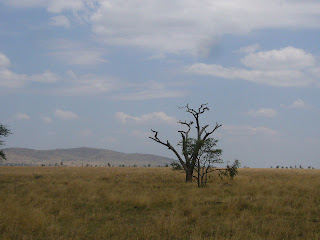 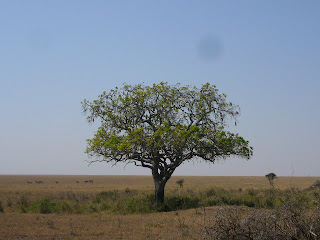 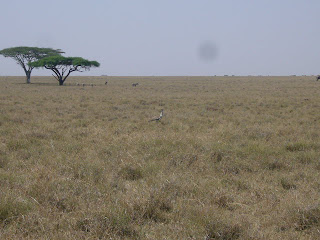 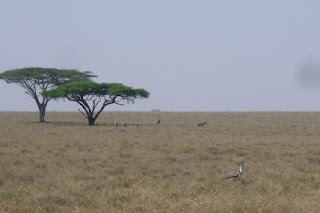 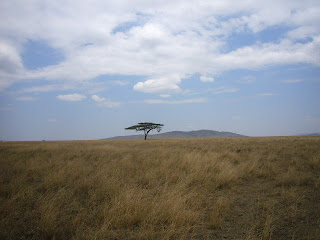 Posted by Eagleseagles at 2:40 PM No comments:

I missed the Second Test while I was away in Africa. A mate text me the result and the words "India were rubbish". Obviously I was happy we had gone 2-0 up - but winning by over 300 runs and that comment made me sad. The No 1 team in the world - the most talented batting team and they are rubbish.
Something has gone wrong - no dis credit to our team who are playing at the top of their game- all of them! The preparation must have been wrong.

I watch the 4th day of the Third Test and the teams are really mismatched.

I only hope "the little master" Tendulker can show some fight - he does look solid this morning.

Yes course I want England to win this match but I still want to see those glorious stroke making of Sachin!

Anderson is bowling so well....

Posted by Eagleseagles at 11:33 AM No comments: