Off went Rocket Man (Bob) up the slope at speed. I followed more gingerly.

Bob had scooped a look into a friendly womans scope and seen said bird. Nowt said to me as I attempted to connect.....but the friendly woman who might be Penny Green - a guy Paul Jones on SOS has suggested....he said she stayed on the bird until he got there so perhaps he wasn't the boyfriend after all!

With some directions I finally saw a very dark blob pop in and out of my view as the waves were large! Eventually I was able to follow where the duck blobbed....it was quite distant and I was able to see the front of the duck and then a squint and the bill appeared - I zoomed in to 40x and then 60x and did my eyes in! Watering they were.

Birders appeared from the left, right and it almost felt like from above!
Soon there were desperate birders calling where is it how far out ....
Bob said lets move to the left as the sun is about to do my eyes in.....we went left and onto the beach the friendly woman and a bloke came along.
We were all looking straight out when someone spotted the duck again and soon all our scopes were on the duck and yes he was travelling towards us.....until we had splendid views.
A birder Bob knew was put on the duck in Bob's scope. But there were a few "famous" or infamous birders - well one in particular who had been getting very twitchy as he couldn't find the duck! We had a little snicker!

Time to be off to look for a Scaup on Scotney. Well we didn't find that duck but we did find a female Scoter sleeping and a Ruff with the lapwings.Best of all Bob spotted a Red-necked Grebe a self found as no had reported it before! Brill!

I look at my pager...we were on our way back to Dunge as the Birder Bob knew - wish I knew his name....had told us there was another gull found - my pager told me an
Iceland juv...now this is a lovely gull...the juv in particular!

So off we went a bit speedier than originally.Into the centre -look at the board and Iceland from Makepeace..."lets go"..."no need for that love" called the woman volunteer it was visible from in here...soon Bob had picked up the gull with a little help from another birder (complete with very small child) and I was soon looking at the lovely creamy colour of an Iceland juv...I even got an elderly lady onto the gull in my scope while we attempted to get her husband (who Bob had let see the gull in his scope) onto the bird with his scope...just as we-----and all the birds flew! 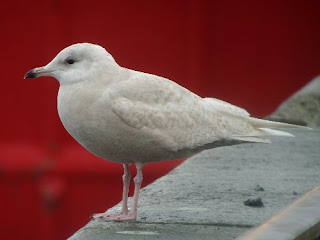 This is a similar bird - taken in Ireland by Rich Bonser - I am seeking permission to post this...I will remove if asked.

Very satisfied with our days birding we realised we were starving...nope just very hungry as we hadn't eaten since breakfast...Bob a large bowl of cereal, while I had managed a half bowl .......so off to the Little chef at Brenzett....

on route we stopped to seek out a Liuttle owl and whilst we saw it fly we were both hoping to be glared out by its superior eye! As we left the LC we both saw a Barn Owl fly up from the roadside.

Then it was too dark for anything other than the motorways to home.
Posted by Eagleseagles at 8:08 PM

Great report, looks like you got so exited with it you have invented a very rare owl sneaky,
LOL.
Liuttle owl.

Just of to look it up, and possibly a quick exit, from your blog!