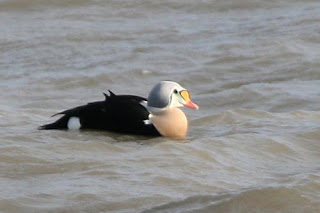 Sometimes you get them - a day that is meant to be picking up bits and pieces with the possibility of a mega that turns into a top birding day!

Well on Sunday thats what happened to Bob and me! After a quiet Saturday when as the weather was so nice in the morning (after the rain!) I went out to seek an American duck which was fortunately a male.So off down the M4 and nearly to Greenham Common(that brought back memories of the early eighties!)I was able to arrive at Lower Farm GP's and spy the bird an American Wigeon add see a real rariety(after all the culling) a couple Ruddy Ducks. Later the pager said that a Green Sandpiper was also present but I didn't see it! Yet more Red-creasted Pochards. Where have they all come from this winter I wonder?

OK on to the day!
SUNDAY
Having arranged with Bob for a catch up day for him. A whatever birds I see, I see day for me with the possibility of a mega on the sea plus if we looked carefully a few new species for the year for me.
I thought it would be an appalling day- it wasn't so I must trust Bob's judgement and not look at my weather forecasts!

Off to see the long staying Night Heron at Hythe - well Lympne really!
We arrived a bit later than I had meant, met some birders along the track who Bob recognised from West London.We laughed they were down "in case" the King Eider was relocated so were seeing the local "sites".
They said the Heron was in the reeds in the main canal opp the bridge. That was a shame but the canal was free of ice so bigger fish available I reckon! It was showing better than pics from the night before year tick for Bob. I think he added about 26 today! over the ton as well.
Bob had an idea and we went cross country to Hythe proper to the beah where we picked up Purple Sandpipers - lovely little waders, worth a closer view so we staggered down the pebbley beach and up again this time with an occasional helping hand from Bob as I soon discoved my knees were not working so well today!
On to Walland Marshes were a large flock of Bewick's had been reported. Well fields full of Murte Swans kept us wondering where they might be as we weaved our way across the marshes. Spotted just round a bend a lot of Mutes with one interesting swan...scopes out...I saw behind us a flock of.....yes Bewick's and I promptly forgot about the "interesting one" and concentrated on countingthe Bewick's - I have a real soft spot for these elegant swans. Lots of youngster's in with the adults- a great sight.
a good place to read up on Bewick's (these are the Swans that Peter Scott first drew at Slimbridge and discovered that owing to their beak patterns you could tell one from another) is on WWT website - here Bewick's Swan Diary

I counted 79 - and Bob 81 - one missing as there should be 82!
We then drove to a farnm we know where there are lots of passerines.....and there were two flocks, one mainly Corn Buntings (18) and one Chaffinches - I never managed to count them all as they were very flightly , more so than usual. 30? 40?
No Yellowhammers and a couple of Tree sparrows this was worrying as usually there are lots more! Eventually we had great views of a lovely male Yellowhammer who had flown down to drink from the puddles next to the car. Why dont I have my camera on the back seat of the car when I need it?
Got to sort out the compact camera...maybe get it repaired if thats what it needs?
All the birds go up as we see a Hen Harrier explode out of a field and fly up! Brilliant we watched her for a while untilshe flew away....
A local birder than pulled up and after a chat we went further down the road to the next farm and outside there were lots of House Sparrows with several more Tree Sparrows....this is were they were as this farmer has put up feeders and nest boxes...no further sign of Yellows tho but bingo...a Fieldfare calling and then YES finally for the 2009 year a Fieldfare and then another! The local birder had told us that all the Redwings had left in the cold snap earlier and just about 100 fieldfares had stayed...last we see of the Redwing then til October.
This was getting good!

So on to Dungeness and a loo stap! Lets see whats about. Well the Black-necked Grebe was still at Christmas Dell and the Slav had moved to Denge Marsh - but the variety had lessened not so cold today no iced up ponds so birds able to feed anywhere.

Off to see if we could spot a Ruddy Duck for Bob...few and far between but yes there were two! In the hide and a quick look around two Coots and two Tufties and Black neck grebe - were all the ducks in the reeds probably...aware of time on we went to Arc pits to seek out Firecrests and maybe a Red head?

Pager would have bleeped but on solence except for megas - but sense it and
Caspian and Yellow legged Gulls - where? on ARC! bit faster movement.
Bob's off mets birder coming the other way and speeds off - must still be here great!
(Meanwhile I am trying to see whats on the mob as it rang with with-held on...I am expecting calls but work related not on a sunday so I dont answer than its a left message...I leave it can see this later.)

Arrive at hide- blokes been there 5 mins tells us where a Caspian is - Bob is on it - here Corinna...yes! 2nd Winter and a lovely bird.
Back to my scope find bird....what's the difference between 3rd winterYLG and adult I ask clever gull man...structure...and then we have a short discussion , while everyone goes through the hundreds of gulls....

Yellow leg - describes where - oh I think I have it..got to be...check whats happening with other gulls around it yes on same bird.

I decide to ook at other end to have a break from gulls and so does another birder we call about the same time Redhead and yes goood for Bob...

I have the Adult Caspian and soon all on that as well! We look around and no new birds....come on says Bob lets go find the Firecrests....on way back I ring 123 - its Seth in Devon do I have a half decent Fieldguide? They were on a female poss surfscoter....ring Seth not with me ....have a chat...(I'd had texts already of
Pen Tit, Cirls etc!) reach car - seth says King Eider as Nick (in Devons pager has bleeped) - I look at pager Jury's gap - very close great...Seth hears me say
"King Eider - jury's gap LETS GO NOW! bye Seth must go!....