Well a gentle stroll through Bushy Park this morning for a couple of hours with Bob
increased my year total by 4!
Green and Great Spotted Woodpeckers - rather more Green around. Mandarin Ducks - 4 males noted plus one female.

A roosting Tawny Owl was the best!

My first Snowdrops of the year.....a chance meeting with the Royal Parks Ecologist was very interesting.

He had been in a meeting earlier that day and they witnessed a Sparrowhawk consuming a Pigeon - he even had photographs.

At Bob's suggestion I visit Barnes in the afternoon (I usually go first thing) was rewarded by finally sighting Bittern for the year! Also heard was a Cetti's but where the little rascal was I could not locate!

Last years Bittern - on ice! Battery in camera ran out whilst at Bushy so did not have it with me!I will post a couple of pics later when they have been downloaded! 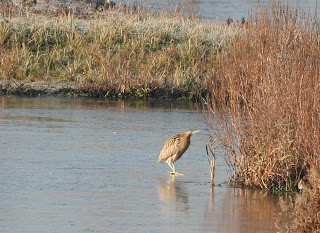 Posted by Eagleseagles at 3:20 PM