This has got to stop! Titles like this mean only one thing - I havent done much birding this year yet!

Bob and I went to Gosport to see our friend "Gossie", the Ring-billed Gull. We took all of 5 mins to find him on the pond - he was just floating! Well when the bread came out there he was showing off his wing panels and his ability to fly! 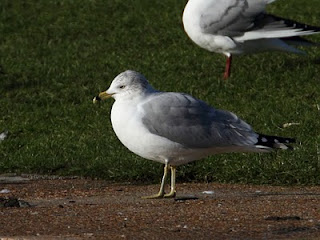 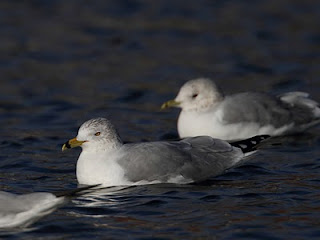 So Gossie - then a photo of Gossie with a Common Gull in the background.
The photos of the "gulls" are all by Phil Wallace - thanks for permission to use them!

Oh yes along with the BH and Common Gulls - and a Herring or two! So after having a nice conservation with a elderly couple we went to see what might be about in Haslar Creek and there were two Med Gulls! We searched a bit and came up with Red-breasted Mergansers,Brent Geese, a Curlew, Redshank then Ringed Plovers lots and a Dunlin with them, an Oystercatcher was hiding in an inlet and we finally saw a Little Grebe or two! 10 year ticks within 45 mins! 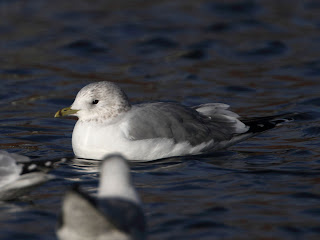 Sussex was calling so off we went - among places we visited were Thorney Island, Selsey Bill, and Pagham area.

76 species later and 36 new year ticks for 2010 for me (34 for Bob) and we had seen some lovely places in Sussex and some wonderful birds.

Highlights were Bearded Tit at Thorney (finally!) and Ruddy Duck (undisclosed site to prevent Defra shooting the a*** off these!) both Sussex ticks for me!
Project starting in 2010 is to improve my Kent and Sussex lists.

We also saw Whimbrel, Greenshank, Green Sandpiper,a Blackwit, and at Church Norton
Great Northern and Red-throated Divers and a Slav Grebe. We also found Siskins and Green Woodies!
We finished the day in fading light at Pagham Lagoon - watching a sleepy adult male Scaup...what a beauty! He did look up briefly so we could catch a glimpse of his bill and head properly then promptly went back to sleep!

A good day out and a good days birding in great company.

No pics as I left the camera in the boot of Bob's car - and when I finally remembered it - the light was not good - so I shall borrow a couple of photo's or post the links to them - the Scaup being one! 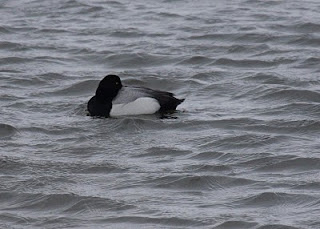 Posted by Eagleseagles at 12:02 PM

Some nice birds there C.
+ Ring-Billed/Common-Gulls too!