Quest for the Surf Scoter 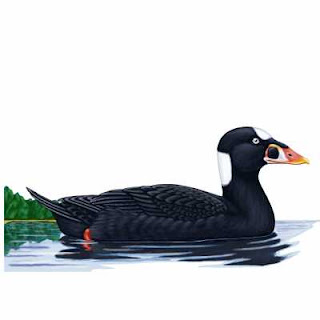 When we were on our "Bird Race" we spent time sea watching on the Moray Firth.
The last time I had seen a Surf Scoter was on the Moray Firth. Not one had been seen there this winter.We did see 110 Common Scoters and several Velvet Scoters.
110! 110 yes that number and very close views too.(As far as my year list went I had already seen both Common and Velvets but certainly not as close views!)

On the third day we went on an exbirdition up the East Coast north of Inverness -
to go onto the Black Isle to look at the other side of the Moray Firth and to wend our way to Dornoch. 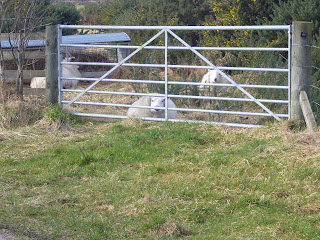 Saw this animal and was amazed at its face - not sure if its caught in this pic though- appeared deep in thought! 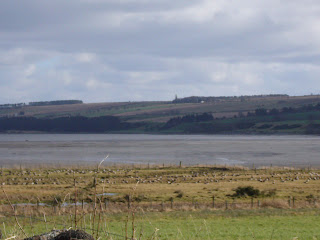 Not so much snow about here!

We birded our way up the East Coast to Dornoch.What a absolutely stunning Town this is and what a location. 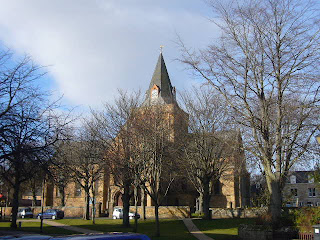 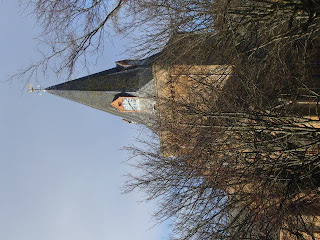 The Cathedral so its a City?
I love to look at Churches where ever I go and sometimes when we are birding it isn't possible so a photo opportunity was not to be turned down!

On to the Target bird of the day!

We got to the coast and the car park to sea watch, at first there appears to be nothing there, then as your eyes get used to the sea and glare and the lumps and bumps you begin to see ......yes black dots and these became Scoters hundreds of them! A velvet but mainly commons and more velvets and mixed up lots of Long tailed Ducks which are a really lovely and striking bird of its own! But we were after a rare a rarity.....search and search and scan and scan....
"Whats this?" No I think I saw it and its gone!

What to look for with a Surf scoter - well you might think its the bill or beak...but in lumpy sea best bet is to look for the white circle on the back of its neck.

We were there scanning...John, Peter, Paul, Bryan (I don't like sea watching)and moi.

When Bryan says I think I have got it...."help" to Peter ...now if you were there you would appreciate this "look in my scope" (Bryan is over 6foot and Peter well he is smaller shall we say!) How Peter managed to look in the scope, see anything and be able to confirm it we dont know but he did!

Where? Eventually we were all on the bird and enjoying views of it.

How did Bryan spot it? Well as often with birding a bit of luck...many birds took off and flew while he was watching them and in the midst a white circle on a neck!

Bryan (I dont like sea watching) was the hero!

NB By the end of the week Bryan was loving it!

Target bird found we could have lunch!

Interesting birds.....well inquisitive and hungry birds well just plain get in there and get their food birds!
Rooks, Hooded Crows and Jackdaws. 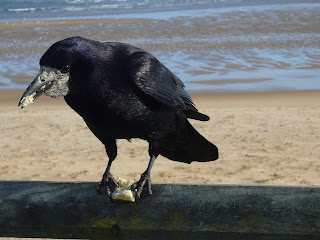 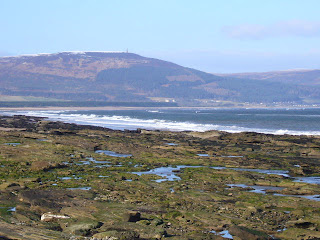 Posted by Eagleseagles at 8:16 AM