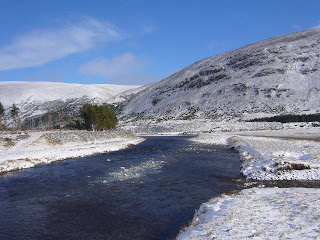 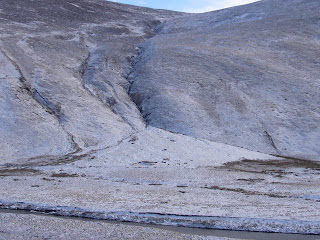 We had a coffee stop and another scan and then on towards the top of the valley. 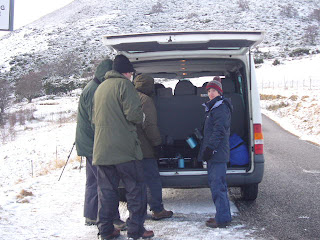 There is a bridge that goes across the River Findhorn (its private) but there is a good area to park. We watched the weather here as the snow arrived - we sat through bit of a storm - a whiteout- on being asked by a wary Bryan "will the road be alright to go back on" John's response of "It will be fine".
Were they really reassured? Well I was knowing Johns reputation as something of a weatherman.
Still watching small tornado's of snow pass by us and the hills disappear was a trifle scary.
Next the sun comes out! Bryan and Paul intrepid as ever walked over the bridge tothe other side. Despite John saying "well I wouldn't cross that bridge" I needed pics so I followed the guys. The bridge did look a little less solid than it had in the past and as it sighed and creaked as I walked over it - I wondered what I was doing! It was a relief to reach the chaps!
It was vvvvcold and the wind gusted at us and it was vvvvcold!

Pics to follow I am with Paul on the bridge and Paul id with Bryan. We had a laugh taking the pics I even had to take my glove off to attempt a photo with Pauls camera.
Frostbite almost set in! 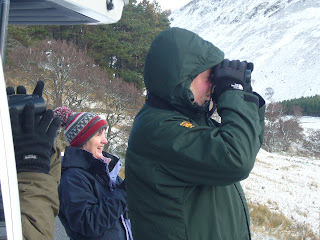 Posted by Eagleseagles at 2:23 PM