in 2007 I was in Espana when a WTP came up on my pager - in Scotland - no chance to go to see it.
So when I saw the wandering WTP that was in UK - thn Holland - then at Rainham I wondered would I ever be free to go to see it.

I cant complain - I was In Shetland having a great time, I was busy working on council business and attending a Conference which was very helpful but that bird!

I was on my way to friends in SE London for the World Cup Final and dinner and I knew just down the road was my bird!

Monday came and a meeting and tour of MOgden Sewage Works......then Zeta to walk and freedom!
Zipping off to Kent under gathering black clouds....

as I approached the M20 Breznet turn off the sun was out! The sun shines on the righteous - was the bird still there? Nothing worse than looking at the pager and nothing since the morning...when it had flown towards the reserve - where was it , had it gone?

Arrived at the arc pit none the wiser - about 3.30 ...birders walkking back to the car park - still there? yes!

At the screen it was jammed full a bloke in suit trousers and little bins was staring over the next bit of the screen....others in the distance were on the bank.

Where is he? Brilliant directions and there was the quarry!
Up went the scope and what a stunning bird! So - would you like to look through my scope- due reward to the bloke who had escaped work early!

We then spent a pleasant 3/4 of an hour watchingWhite-tailed Plover - apt name feeding and being territorial - a hapless Oystercatcher was harried from his area...
a feisty bird!

The bloke left - and I stayed another 15 mins just enjoying the bird who did a little circuit so every now and then came inro full view! 389 Uk bird!

I the went to the Dunge Centre - to use the facilities - collect water and off to Denge Marsh to see how the Purple Herons were and maybe a year tick of a GWE! 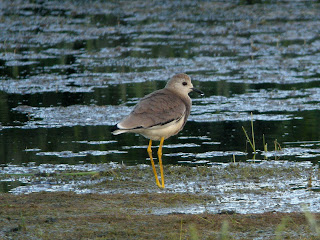 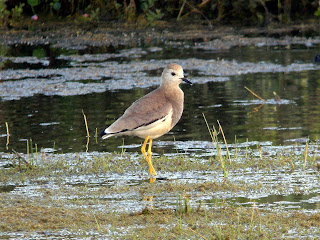 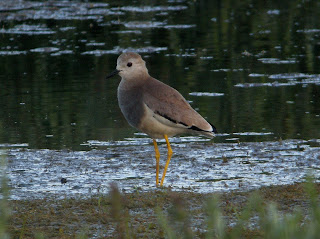 Posted by Eagleseagles at 9:23 AM