After we had landed at Madrid Airport and been picked up by Jules Sykes of Oliva Rama Tours (slightly changed itinerary for next year).We headed North of Madrid birding from the minibus - as we spotted Common Buzzards, Booted Eagles, Black Kites and Montague's Harriers.
On towards our Hotel in Sepulveda we stopped at a wooded area full of bird song and a variety of birds,Turtle Dove,Black Redstart, Nightingale, Goldfinch, Blackcap,Calling Cuckoos,and then Golden Eagles soaring above us!
There was a distinctive song or was it a call? A small warbler was above our heads and eventually I was able to separate its song from all others and I was rewarded eventually by a sight of a blocker for me Western Bonnelli's Warbler! Jules had come up trumps again! My first of three target lifers!
The birds then seemed to tumble out of the trees for us as Chaffinch, Jackdaw, Serin, Wren and Spotted Flycatchers all followed! Kestrels hovered above while Blackbirds alternated with beautiful song and loud chattering alarms!
Eventually a Melodious Warbler was located, along with Great Spotted Woodpeacker.
Others in the group heard and saw several other birds which I eventually caught up with later in the trip on next morning!
After unloading at the hotel we went out again.
We stopped near Sepulveda in the Parque Natural del Rio Duraton to seek out our first target species of Western Orphean Warbler a lifer for some, Bob and I were more than happy to see this little beauty.The Parque entrance track passes across a plateau of superb limestone grassland and scrub. I noted a slight twitchiness with Bob however as his target was the elusive Dupont's Lark! Of this bird not a sound was heard however we met the Park Warden and he gave us a precise location(well a large area it had to be said but at least we knew which way to look!) and said with patience you ought to see one! Well time was getting on and this location had to wait for the morning!
The next morning found us once again seeking the elusive Dupont's Lark. After a long time and a downpour of rain where we sought shelter in the minibus the sun again came out and with it birdsong and the distinctive song of a Duponts could be heard clearly.
Where was the little endangered species? Well we heard and looked and looked and heard but not a sighting was to be had. Many birders dip this bird and I must say i was really glad that I had seen Duponts last year on our way to the Pyrennes. However I was very aware that Bob's target birds were two- one being Dupont's Lark so for our trip to be successful we needed to pin this bird!

Jules spotted a lark on a rock and said quietly - Duponts singing and there followed directions!We all got to see the bird and it proceeded to sing away for an age! In fact so long that I actually was able to get a record shot myself before it disappeared into the surrounding grass!The pic below is not mine but from Jules Sykes. 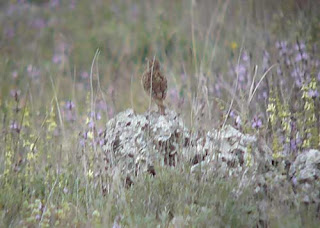 Back for Breakfast of Coffeee and toast then on to look at the gorge. The river has cut a deep scar through the limestone, in the form of a dramatically beautiful gorge that weaves it’s way through juniper and wild-flower cloaked hillsides.We stopped off the road to view the wildlife. A number of birds were called and plants id...then I spotted a couple of Griffon Vultures sitting under an overhang and posing nicely. Time for some digiscoping and once I have down loaded them I shall post a couple of pics!

Then it was time to leave this area where we could have birded for another day at least!

Oh yes we had wandered around and seen Larks of all kinds ,Southern Grey Shrike and Woodchat Shrikes a plenty with Tawny Pipits galor - heard Dartfords with some seeing the beauty. Above us were Short-toed and Booted Eagles - Two species of Black eared Wheatear with the more common Northern everywhere! Beeaters,Corn Buntings on wires.

Oh yes Spectacled Warbler!
Somewhere I have omitted the stop for coffee in a delightful place whose name eludes me. Stork City would be a good name for it as these delights were everywhere!I shall return to this on another post!
The journey to the Picos was somewhat spoiled as it rained and it poured!

As I re read this and look at my notes I see I have managed to leave out lots of birds from our first day and some delights of the morning of the second day such were the numbers thick and fast of the first two days!

How could I not mention the Golden Oriels, the Hobbies, and Woodlarks? The Egyptian Vulture so magnificent and frankly huge? Hearing Quail again? oh and Hoopoes?
Well along with Sprawk and Chough and a juvenile Rock Sparrow I did...and thats life!
Posted by Eagleseagles at 9:38 AM