Barnes on a frosty day

Well as the Brown Shrike has left Staines Moor we decided to go to Barnes this morning.
We couldn't go very far as we both had other committments/work to do.

Beautiful light for photography and beautiful scenery with a deep crisp frost.
Photos of this later when Pat sends me some.
We were thankful for the take away Coffee......
Arrive at WWF hide to see a Bittern fly to our right and disappear into reeds- then almost as we had settled a birder called "Bittern"- and we looked through his scope and then I got onto the bird myself while Pat was trying to find the Bittern who was being a reed! After a few shots Pat went for a wander and we concentrated on finding the Bitterns...and not long later a Bittern popped up onto the top of a reed - another appeared below and then that Bittern went to its left and flushed - another Bittern! Who flew away and then landed in the reeds opposite the hide as in this pic! 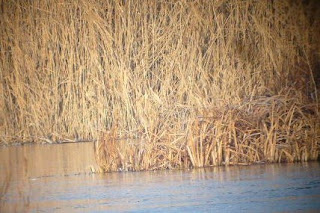 So that was 4 Bitterns!

Needless to say the water was frozen and the Lapwings,Shelducks and assorted gulls were standing on ice - I noticed a bunch of Canada Geese were still on their island keeping off the ice! Mallards waddled and slipped and slid their way towards what they thought was open water.

I walked towards the Tower Hide and re met Pat and we went to the 1st floor to see Water Rail, Common Snipe and lots of activity including a flying Bittern! Plus lots of gulls, mallards and cormorants. Oh and of course Grey herons - everywhere!

I went to the top deck where a very loud American Woman was evidently having the time of her life! Lots of windows were open and there were three people up there - one birder obviously enjoying his superior knowledge telling two non birders what was about. All very loudly- where has field craft gone?

I closed all the windows where they weren't and looked out to see a Bittern standing out on the ice and in full view in the sunshine - so it was a scurry down the stairs to get Pat onto the Bittern...yes it was a long way and a 100-400 lens is not really enough - but I await the photo with baited breath - it looked ok in the viewfinder!

We were by now cold as the wind was vv cold coming through the window. so it was time to return to the warm!Via Long tailed Tits, Redwings, Robins, other tits and Song Thrush and this bird who tried to be tricky! 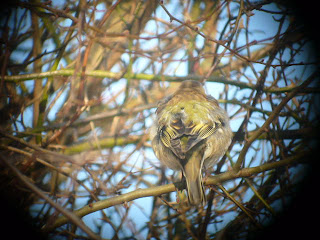 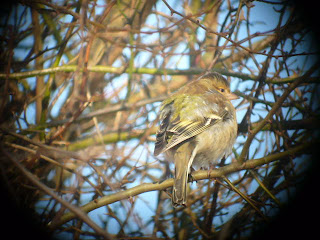 So no longer tricky!

So a loo stop and then off towards the Wildside...and possible Redpolls.
A visit to the much more settled Cranes.
then Redpoll...found some amidst Goldfinches - Lesser.

Continue walking and outside the hide I never remember....Wildside Hide will do! There is a bridge and in the background silver birch trees - lots of birds on these- a few Goldfinch and there are the Redpolls - lots of them and then there is a different one and its a Mealy! Great - a patch tick!

After some photographs of Redpolls on a tree next to the hide, its back to the cafe for lunch...Bangers and mash and onion gravy with broccoli....lovely and warming.

Finally I am in the warm and watching the Cricket from SA and then as I post this Oz and Pakistan. Well the SA 2nd test is in the balance.....Oz were on the wrack a bit!

We might have a photo of the Redpolls....and perhaps a Mealy as well.
Posted by Eagleseagles at 3:44 PM