New Forest and a twitch!

Lovely day monday - so after a lete start Bob(day off)and I found ourselves in the New Forest looking out for Gos - again - raptor lovers both!

First bird seen? Crossbills!
Second bird a Buzzard who very conveniently flew into perch right in front of us giving lovely close views - I had the compact with me- the Canon of course was in the car!
So it was hand held digiscoping!
We watched the Buzzard until a loud mouthed dog walker disturbed the bird! Shame was a very nice dog walker and well behaved dog were close by for ages - then idiot walks in and not so obedient dogs hared over to good dog!

One Gos had been seen 30 mins earlier by one chap and another different bird by another birder!

I went for a walk into the trees and flushed accidently 3 Roe Deer - our own native breed with their lovely velvety antlers! 3 birders were very pleased as the deer made off down the side of the valley and up the other side giving great views!

Hawfinch were also about.

On to Blackwater Arboratum (third visit) to look for Lesser spots....heard very clear Firecrest calls along with many Goldcrests. Goldcrests seen - Firecrest (much to Bobs friustration kept his head down! A flash of white - 75% certain but not a good enough view for Bob! We continued to hear Firecrests but not seen em except for a flash here and there! I did try - even though I do have a year tic already - but I love those feisty little birds! Of the Lesser spots? Well we heard long drilling but no calls- I did see a small bird flit off through the trees with a jerky woody flight but so brief and very quick no chance of bins on it!Now I really like BA but another frustrating time.

Bob says well its off to Farlington then...what we were supposed to go to Keyhaven and also see if we could find any Dartfords....what?

Great White Egret has turned up there - ok at least we would gain a year tick for the day and maybe that LEO was still about?

Off up the M27 quite good in the afternoon.....in true twitching fashion I hadto drive quickly now didn't I....arrived to park and see a warden(?) go through the locked gate to the Information centre by the time we arrived he was watching the GWE.
With a Little Egret in the same field and in the scope view for comparison!

Is the LEO about? Well I dont know as I havent looked today and I have just arrived says the warden(?) He then directed us to the seawall.

Once there were the bushes to the right or left o well lets look here. We searched one set of bushes - you wouldn't elieve how many LEO's I saw! ON 60x zoom though they were all leaves/twigs and stuff! LOL!
Bob had seen the Splatt Bridge one on Sat but searched hard for this one.

A local birder eventually walked by and I asked him about the LEO- oh I saw it last week over there and took me towards the bushes/trees nearer to the car park!
It was there- but not today! Bob had gone in totally the other direction and found another local birder who took him towards our bushes/trees and I joined them. of the LEO well another birder who knew every inch of this area had been here earlier and said he hadn't seen the LEO at all!

Thats it lets get back to London as I ad an evening meeting to go to!

A lovely day in the sunshine, some fab scenery, some nice birds and a twitch and a miss or two- thats a birding day! 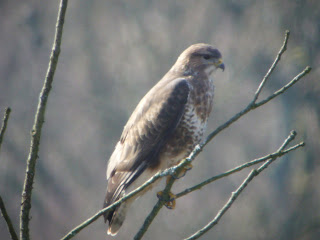 Posted by Eagleseagles at 8:23 AM