Whilst I was in Scotland - mainly Shetland for two weeks - I took advantage of the early Saturday morning and finally clawed back the Sandhill Crane I had so unfortunately missed when onevisited the Orkney's in 2009. (Dont think I have really forgiven Seth for not phoning to see if I had a lift! -oh yes I think I have now he is all engaged to the lovely Sami!- but only when my wedding invite lands on the doorstep!)

The first week on Shetland was really different in that there was more sun than in my trip in June 2010 - lol and I didn't have any suncream- nor did anyone else! Still there was wind but from the wrong direction - westerlies.....so the birding was hard and the actual birds seen fewer than I have experienced before on Shetland.

THat saved me doing a trip report - since I still havent written up Tanzania report properly it was a godsend!

I do have some rather nice scenery pics from this trip of my own which will go up at some point probably on a dark winters night!

The second week on Shetland was rather different in that we saw lots of species on the Sunday but it was still tricky birding due to the high winds rain and even snow and sleet!

We still saw some superb birds , Otters and of course Seals both types and Harbour Porpoises.
Sussex Pallid Harrier being bird of that week-
Sandhill Crane stood out on its own for week ending 24th Sept - the Long-toed Stint only being a squint in the scope!
Bird of the first week - a splendid Lesser Grey Shrike- adult male with gorgeous peachy breast! followed by the Black Headed Bunting(juv) on Unst that was a lifer for me.Two visits - one distant and gloomy views on the Wednesday evening it was first seen- a fast twitch from one end of Unst to the other, and rather better views on the Thursday morning on our way off Unst- delayed there by the ferries not running to Unst for a couple hours whilst they went to Fetlar for a funeral. I did add to my Shetland list with quite a few raptors - all seen well! Including another Pallid Harrier - my third different one for the year. This one was oiled from the Fulmars - who clearly took a dislike to this bird. He still managed to entertain me and the visiting and local birders well during the trip. 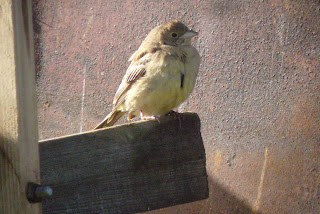 Bird of the second week was a tie between a rather lovely Olive-backed Pipit on Unst at Balta School.Not on the Tuesday evening when it didn't settle for very long but the next day after school when it was very confiding and sometimes was too close for the digi videoing that was taking place! 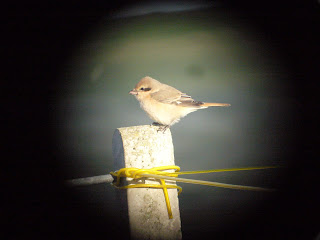 The other bird of the week was the gorgeous adult female Isabelling Shrike in that rather splendid valley of Quendale (includes Hillside) what a local patch!
Even I got a video of this delightful bird eating a mouse! 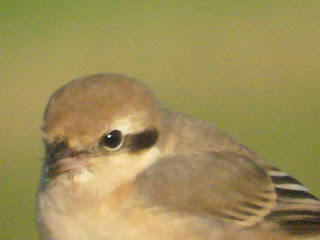 Posted by Eagleseagles at 7:42 AM

not bad! some really good birds there! cheers! Tommy

Not bad at all!