Finally a catch up!

As ever behind the times!
Last week I went to Norfolk - I saw some very nice birds - I self found some year ticks (which is obviously better and brilliant!)- I also was in the right place at the right time to not see the Rufous-tailed Robin!

I saw what probably was the RTR - but it was all black - nope thats correct - a silouette - why did I not see the bird? Well if you have read the tales of the finder and his mate - it took a tip top birder with bags of experience 90 mins of doggily(is that a word?)no doggedly thats the word! - seeking to see the bird enough to call it!
Now I have never claimed to be anything than a learning birder- yes I can take kids and friends out to show em birds but I still need to have the Collins at hand to check some stuff out- I am very lucky in that I bird usually with more experienced biders so I have a fount of their knowledge to call on!
I have quite a good life list with some wonderful birds on it - most of the birds have been added since I took vvv early retirement and so I have time to go see birds but I cant always go to see birds I would like to see cos of committments - as a local cllr who is also a cabinet holder means I cant always drop everything or I would be posting this from Shetland as I speak!

But I am not a a bad birder - actually I am a bad birder according to that book and an Urban Birder according to that book!I am capable to adding a tail to a wing and a head even if only glipsed a midst twigs and leaves and stuff but its impossible to call a bird even if its the only bird in the tree bush or shrub or whatecer when you cant see more than an outline - now I think I saw it! My bins are really good in low light but I couldnt say I could describe what I saw as anything than a bird (sp)- or a robin (sp) very frustrating as I knew I couldn't return next day - as I had an early appointment with a rugby game before I was going anywhere!But more than that I knew the weather forecast and I knew the bird would fly and not be there tomorrow!
I was glad I was present in Norfolk and able to get to try to see the bird with a lot less people around than the masses that turned up the following morning. But we all ended up with the same result! DIP!
But the day had been good - with Lapland Bunting and Richard's Pipit and Jack Snipe- as well as lots of other birds that I had seen before this year but were not additional to the year list
The w/e got better with RFBT in Kent - some nice birds at Dunge -and a Pallas' Warbler around the Obs! then the most amazing pager report a Isabelline (nope not Shrike)but Wheatear in Sussex.
I had started at Cliffe - got a message that a Redflanked Bluetail had turned up down the road at Northward Hill and ended in Sussex via Dungeness! Little did I know that I would be back at Cliff the following day to see my 3rd Daurian (Isabelline) Shrike within 3 weeks! 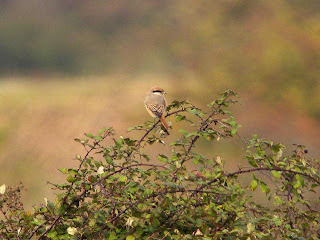 Thanks Andrew Lawson for the Izzy Shrike!
This was for my Kent list but also it was an Adult male and the adult female I had studied at Hillside on Mainland Shetland was a gorgeous bird but a male adult well that would be stunning!

When a Booted or Sykes Warbler was on the pager at Landguard that was it off I went- hoping it was a Booted! I had seen Sykes Warbler on Shetland last year - but dipped a couple of Booted there after I had seen the Sykes. A strange but true tale now breaks forth - most of the massed birders at Landguard wanted the bird to be Sykes but me nope I wanted it to be a Booted!Whatever happened whether it was a Sykes - well it would be a year list tick! But when I saw the bird well it was a Booted- finally! Great stuff.
Now do I like Suffolk - yes indeed!
Posted by Eagleseagles at 12:10 PM