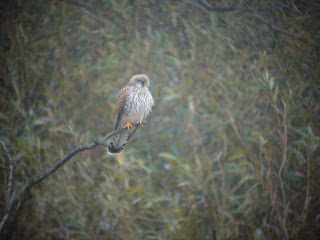 Yes one of the local Kesrels! 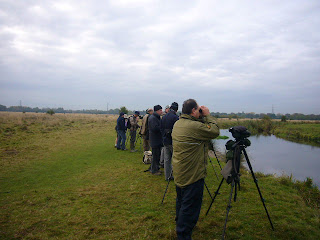 9th day twitch makes it all so quiet. A couple of these local guys have seen the bird before. 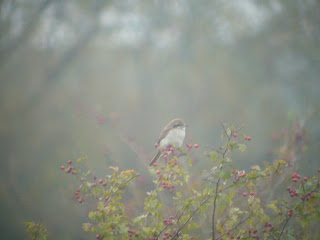 I first heard about this bird on my local patch whilst on Fair Isle. Would the bird stay until the w/e?
I expected to go on my return on Saturday afternoon. On arriving home I heard my neighbour had died and all thoughts of the bird vanished.

So it was first thing Monday morning at just before 8am that I found myself on familiar territory.Bob a local surrey birder I know was there and had been since 6.30am.2 other chaps from Redhill - deliberately missing the w/e Twitchand a couple over near the bridge. That was the total until Franco arrived.

No sign of the bird anywhere.I searched bushes and tree with my scope and thats when one of the local birds - a Kestrel was spotted perched up.

It was some time about 90 mins after I arrived that the Brown Shrike decided to get up and have his Breakfast - mainly of wasps!

He showed clearly (not that you guess from my hand held digiscoped views!)
At least they look alright whe in the camera...if not on the pc or here!

Lovely to watch the bird perching, flying to catch an insect then eating it, coughing up a pellet and then repeating it all again.

Off to walk Zeta the Dog now!

Will be blogging about Shetland and Fair Isle as soon as I can - with some record shots! I am hoping that I will have some clear photos to post when Heather sends her's on to me!
Posted by Eagleseagles at 12:08 PM

Anonymous said...
Well all this i will be blogging later, updating when i can!! well it just ain't good enough C! I expect better of you, LOL.

Hope you are keeping well.

Now go get that comp going.