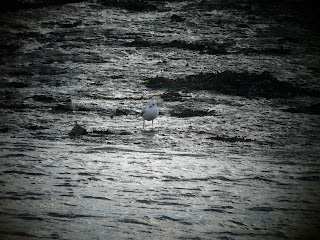 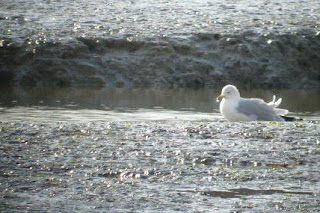 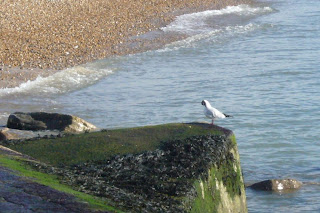 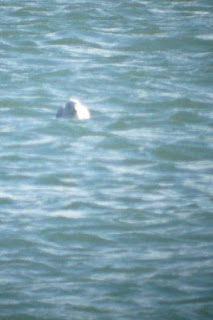 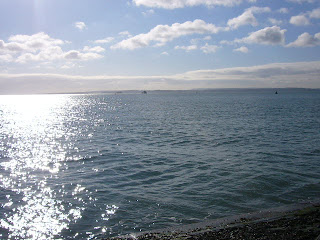 So off to Hampshire- we thought leave later as the weather forecast was dire. We get to Portsmouth - have they seen any snow?

Surrey we came through and whilst the roads were good - you could see the snow everywhere. Hampshire, well it didn't do what the forecast said. We could have left earlier and had longer birding there.

Still first to Southsea and to see an Adult Glaucous Gull - my first adult, all the others I have seen were 1st or 2nd winter.Well he was bobbing about in the sea - no pic any good as the gull was in the sun! Then a Rock Pipit flew up and I heard it but missed it and Bob who saw it couldn't say where it had gone and it wasn't seen again. While Bob went to find another Red-necked Grebe, I watched the gulls and then suddenly I saw a Med Gull, full adult.


Then it was off to Gosport for Gossie the Ring-billed Gull. Who was hiding in a channel in the creek and suddenly popped up for a while and then disappeared down the channel again!

Bob found a Med gull here, oh and our first Ringed Plover of the year! We thought we might have a Barwit but it was another Blackwit! Where are these Barwits?

We then drove over to Blashford Lakes - where we learnt the GWE had flown back to France on the 18th January but they had a showy Bittern. We also discovered where Blackwater Arboretum was, from the helpful Warden. Wr drove across the New Forest to a spot where Crossbills had been seen but we didn't, but heard lots of tits and other passerines and then on to BA. A lovely drive, BWA looks a good place and here we saw 3 male and 2 female Bullfinches in a tree and another male Bullfinch further on!

On the drive back to London we had a Tawny Owl fly in front of the car!

A gull fest indeed.
Havent mentioned the Herring, Common, Blackheaded, Lesser and Greater Blackbacked....who were all around!

So a pleasant 5 for the year list for me!

Have a go at iding the gulls above!
Posted by Eagleseagles at 7:33 PM

1st pic to dark, even with my glasses on!


3 The Hood, + primary projection, say Black-Headed, but a Hood at this time of year!! and the primary-projection to dark for Med-Gull. Stick with Black-Headed!


4 Glaucous, but pick very glaring in that light.