I mentioned below that we went to Barnes on Sunday originally to take a couple of non birders - one of whom enjoyed our visit a couple of years ago to Dungeness.We were all atayng at Greatstone so it was a good opportunity. Well the non-birders couldn't make it in the end.Having booked Sunday "lunch" - we went about 12 as it was very cold and the traffic was so heavy - we went to long way round via Hammersmith Bridge as there are road works on the journey by the Thames.

Once on site it was off to the Cranes....Demoiselle Cranes. Good photographic opportunities and I really like Cranes!
They appear much more settled into their new home now.Apparently when they first arrived every plane on its journey to Heathrow caused all three heads to peer skywards. Well they still do a fair bit of peering skywards and head turning. Seem very alert. 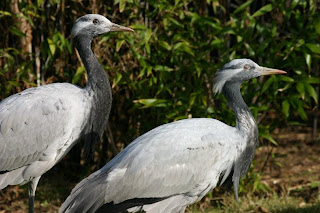 After the Cranes it was a wander around. Did I say it was cold?
Pat was trying out my compact camera - which appeared to have a problem...well it did and it was me! On the zoom when it goes past a particular point you need a tripod or to support it firmly on something. Problem solved.

We were in the reed beds area keeping an eye out for the Bittern (well I was)and I spotted this chap. 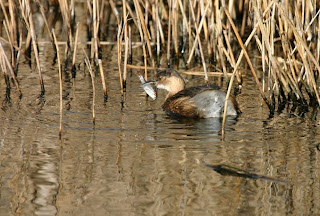 He was just diving as they do..and the up he came with afish which he dropped again and dived to retrieve it and after struggling to get it into position he dropped it again! Finally he won and gulped the fish down! Good protein there.

After a really good Carvery lunch. We went out again and came across this bird.
My friend Pat really likes Grey Herons.....so 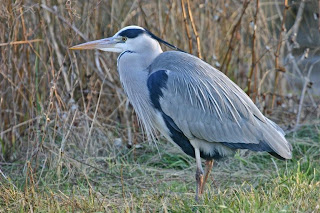 While she wandered about taking photos I went off to the Peacock Tower in an attempt to see a bird for the Year List.
Having successfully found the "Jack Snipe" hidden in reeds...but fortunately bobbing up and down I returned to find Pat still taking photos.

Back to the centre to look for fat cake (birds) none easy to hang in trees tho unless you buy another cage!

Had a look at the Peter Scott book that has been republished to celebrate the Centenary.Interesting looking.

All photos by Pat Simmons 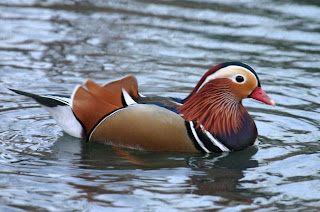 Posted by Eagleseagles at 7:34 AM

Lovely photos C, my 2 fav's the Little Grebe with fish, well caught that one sneaky! and the Mandarin Duck is superb.

All photos by Pat!

I did point out the Little Grebe and she fired away!
That Mandarin was taken on another day I just liked the photo.

I agree with your comments! wish that I had caught the fish and little grebe!!!LOL.