Birding in Cambridgeshire and elsewhere! 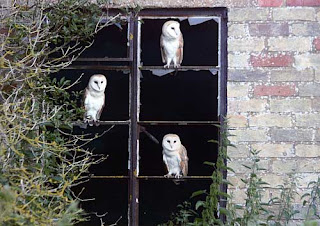 "Then we dipped on - not a bird but a whole RSPB reserve!

Got to Manae and then couldn't remember which road to take for Ouse Washes.Even the RSPB sign didn't help. Neither of us has ever gone there on our own we discover and I didn't check the directions. Now I know I had to look out for the Rose and Crown!
Spent too long up and down roads that all looked the same but looked somehow wrong!
The RSPB site says the following

By plane the reserve is 90 minutes from Stansted airport - head for Ely and follow directions from there.haha.
(course it says all the other ways too!)"

Much to quacks of life amusement in particular.


Bob and I were in Cambridgeshire again today....Sutton Gault to see a year tick bird....Glossy Ibis.We arrived about 10,30 to be greeted with "have you come to see the Brown Heron?"....so Glossy Ibis will be forever a Brown Heron!

We walked about 400 metres down the side of the river where a 4x4 was pulled up we sheltered from the wind behind it spotted the G IBIS out in the field feeding merrily.
The driver turned out to be Edwin Frear(I discovered his name later with some research!) - who chatted to us about scopes digiscoping or buying a better lens for his camera.Then he showed us some of his photo's ...really lovely shots of Barn Owls, Kingfishers and some other birds.He had one of his photo's accepted for publication in the Countryside calandar for 2008.

Three wise Owls.Thats the photo at the top of the page.
Nice talking to you Edwin.

He was a farmer and really keen on wildlife and photography of birds....he said he hadn't been doing it for long. He has a really natural eye.
We left him going to photograph the Glossy Ibis.
House Martins were much in evidence.

Bob and I had already planned that with the impending rain and high winds to go to Welney for food and a warm in the heated hide.But first we had to collect a reserve year tick!
Armed with an OS map we proceeded to drive from Sutton Gault to Welches Dam...short story we got there but realised that the RSPB sign we both remembered being in Manea has been removed! Park Road!!!On the Straight Road we had fabulous views of a Kestrel.The woman driving like a maniac (who turned out was not a local but a birder going to WD too) missed the Kes as she overtook at speed!Whatever was the rush?

We arrived to tick the reserve and see Tree Sparrows and better views we had of them than the Kent birds! On the feeders and in the trees.
We had an eye on the clock and it was time for Welney......coffee calling.We could have walked the miles to the first hide to see if we could pick up Marsh Harrier but it was really cold by now and we thought food!

We had a very nice Shepherd's pie and good coffee. While eating we saw Whooper and Bewick's Swans had already started to arrive, skylarks and hunting Kestrels, as well as a small flock of Redshanks.Then it was to the observatory.Looking out we saw Greylags, more swans and Pink footed Geese newly arrived...(there had been 27 counted altho we didn't see that number)

2 Cranes were in the area but we didn't see them...if it hadn't been for the pager we may have stayed and watched for them...but a Ferruginous male had been seen in Bucks ...ao our route home was decided.(also we still had the threat of impending rain hanging over us)

On our way up to Sutton we had enjoyed seeing Buzzards and a Honey Buzzard (M11)as well as a Sparrowhawk. So having now seen a couple of Kestrels in Cambridgeshire we were happy BOP wise.

We traversed to the A10 seeing mixed flocks of Finches and Pied Wagtails, Lapwings
the occasional Kes and hundreds of Crows, some Jackdaws and a few Magpies.

Our route was relatively uneventful except a traffic jam in Bedford but mainly light traffic and much more pleasant than motorways!It began to rain and the wind got up.

We eventually turned down the A413 and looked for Calverts Lake....Bob's OS would have been really useful, but was at home...we did however manage to find it down lots of little country lanes. The Badger sign a giveaway.Here it was not raining and we realised that we had been birding without rain...so even if it had rained we were lucky and dry!

We didn't even need to find a hide as there were Pochards out in a bay we could see from the other side of the lake. Almost immediately Bob picked out the Fudge duck...I saw it through his scope and then refound it in mine.

Nowt else about so we wended our way home through Alyesbury and through the Chilterns down the beautiful valley that goes through Amersham...

on route ....yes a Red Kite over the road giving fantastic views and then several more Red Kites as we drove on.

A small flock of about 100 Starlings were seen moving in the skies...showing that even though there were not lots of them they could anyway!

We ended the day looking under wooden doors in the allotments near Bob's to see Wood Mice and Field Voles to add to our mammal list of GSquirrel and Foxes. 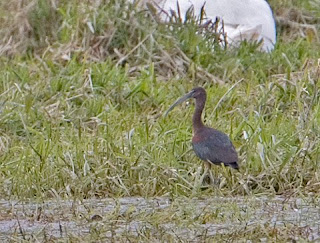 Posted by Eagleseagles at 4:08 PM