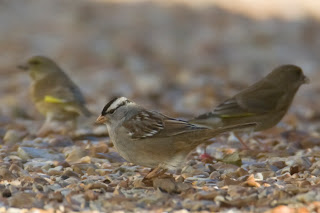 Steve Gantlett from with thanks.

If you read the Guardian, Independent or Mail(eek!) you may have already heard about a Rare bird that arrived in Norfolk last week.It was put out on the pagers on Sunday afternoon as Bob and I were birding in Kent.
There was no way we could go from where we were and get there in the light.Bob knew I had commitments at the beginning of the week and he had to go back to work soon!
We also knew we had arranged before Christmas that we would go to the North Norfolk Coast on Saturday anyway. So we didn't say much.

All through Monday I watched the pager(Rare Bird Alert)and looked at the pc - Birdguides and a bird forum where I knew people who had gone to see the White-crowned Sparrow posted and got twitchy yes thats what happens! A lifer for my UK list within travelling distance and lots of other lovely places to visit if we are lucky and its not three hours of waiting for a sighting.(As it can be at some twitches!If you click on the title you will read the blog of a Norfolk birder I know who went along with most of the Norfolk birders on Sunday!

I didn't mind not going on Monday as I guessed it would be bedlam with many many birders going that day.(In case it left or worse got eaten)

The day dawned and Georgie my adopted cat (who cant use the cat flap!) decided to not come in when I needed to go! Eventually after putting notes through my neighbours door I see her sitting on the pavement outside my neighbours no chance she was coming in! So said cat left outside and I was off.
Picked up Bob and we left his house about 6.20 (20 mins late!) to the M4,M25 and M11
surprisingly not too bad butcouldn't race around as far too heavy traffic.Still by 8.30 we were at Lynford Arboretum seeeking Hawfinches and finding Coal Tits and other garden birds then yaffle and Green Woody appears followed by GSWoody no Lessers tho!
Pager goes off the Sparrow has been seen. Well no Hawfinches but several birders looking. One chap left shortly before us and was at the twitch considerably before us- he must have tanked it altho I had to stop at a garage for the loo- so much easier being a chap that can disappear into the trees!

On to Cley.
Posted by Eagleseagles at 9:59 AM