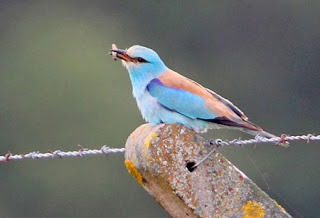 Bill Baston's image of the superb Roller in Suffolk!
now for an armchair tick!

Well its happened this wild bird we saw in December 2010 has been accepted by the powers that be!

I mentally had it on my UK lifer list at 395 - and during 2011 I have since seen 4 new UK lifers including two Lifers.
This is where counting birds gets complicated - yes I saw the bird - will it be accepted?
Atleast with all these birds I am fairly sure they will be but the Goose? That was somewhat of a concern....it arrived with other wildbirds and left with them but was it a wild bird!
Fortunately for me ....it has!

So the next UK lifer will be 400 for me, interesting - not because I will be awaiting a certificate signed by anyone but just because I have reached a significant milestone!

More importantly for me will be what will it be? Where will it be and will it be me that finds it?

Last year I thought the milestone would most likely be reached on Shetland in the autumn 2011 - but it might just occur before the end of September!
Excitement builds!
Now to see an LEO for a year tick!
Posted by Eagleseagles at 11:36 AM

"So the next UK lifer will be 400 for me, interesting"
But you've got 404 on your BUBO Britain Life list? It's displayed on the right hand side of this blog. Counting birds really is complicated! LoL

Sorry - thge list showing is "Birdwatch list" - the one I was referring to was the BOU list!LOL!
I'll change it round until I get the 400 th!!