A lifer and other birds in Dorset. 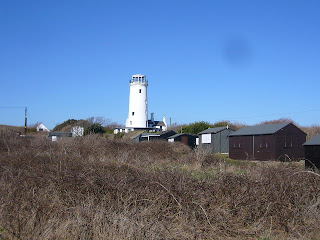 A Bufflehead - yes adult male down in Dorset. A lifer on the Fleet. So for our birding trip for the week Bob and I went to Dorset.
We got to the parking place near Moonfleet Manor Hotel (via Morrisons for breakfast - v cheap and very good!) and there was a birder who Bob had seen at a number of other places - they chatted about....yes Lynx again!
Jules was mentioned again....I think it might be because I now have a sticker re Olivaramatours on the back of my car! So twice in two weeks it has been a starting point for conversations!

A walk along the coastal path and round a corner and there were several birders - some on the foreshore bank and some on the top. There was the object of our attention....a male adult Bufflehead along with his pals a male Merganser and three females!

There were number of Swans there - mutes - no doubt from the Swannery down the road!

Little egret in te background. Then it was off to the Bill!

On route back we meet the birders from the car park...and Bob got to exchange emails!

At the Bill- there were Shags, a pair of Razorbills and several hurtling Guillimots - all going at a 100mph!

Apart from Gulls - GBB and Herrings.....not a lot else then Rock Pipits calling and there was one, two three!

On to the other side by the cafe....on the flat rock Purple Sandpipers - two...still better than no Purple Sand!

We then parked the car nearer the obs and went for a walk along the cliffs....Rock pipit....Rock pipit - well there were lots!

They were in breeding plummage and looking very lovely indeed!

To Radipole....for a coffee/hot chocholate and biscuits and a short walk to see the Hooded Marganser - who whatever the provenence....I like very much! So it was some sunflower seeds into the water ....the Mallards picked off the top but the boy he went off diving for the seeds that went t the bottom!

Then it was off on the journey home!

A sunny day and made all the nicer by lovely scenery being down by the sea and seeing new birds for the year! Oh and a lifer!


The Fleet followed by 2 record shots of the Bufflehead - thats the one with the big white patch on its head! 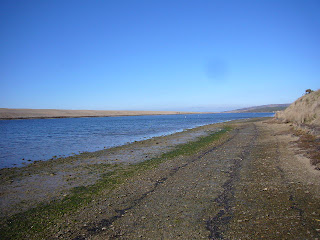 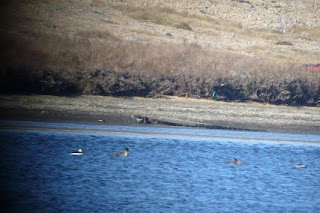 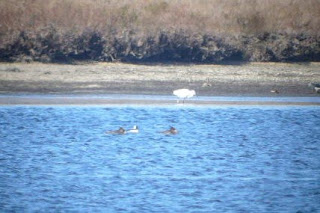 Posted by Eagleseagles at 11:22 AM